Participatory art: a form of art that directly engages the audience in the creative process so that they become participants in the event.

Memory Museum by Samuel Bendriem, Sophia Sherman, and Jackie Charles-Etuk
To display the diverse population of PCA we have curated a Memory Museum. We’ve represented student’s memories with their favorite childhood books, dishes, and family photos. We believed these would show the diversity of the PCA population, and create connections with others who share these personal memories.

Road Monsters Manifesto by Collin Kluchman, Rachel Lack, and Ofo Obuobi
We the road monsters, both wheeled and walking, have united to express our outrage at the war currently being waged on the sidewalks of Paris. Bikers yell and ring angry rings at walkers who walk in constant fear of being run down in the streets. We, in turn, have declared graphic guerrilla war against on conflict. Our stickers can be appropriated by anyone who is motivated to take up arms to protest the war between bikers and pedestrians. Bikers are not to be blamed for choosing an alternative, eco-friendly transportation choice, and walkers cannot be faulted for wanting to wander their sidewalks without care. Accordingly, this work draws attention to a conflict that must be solved through rational conversation and better urban planning. We intervene in our urban environment to reveal an invisible battleground so that others can intervene in this battleground directly and abolish it. 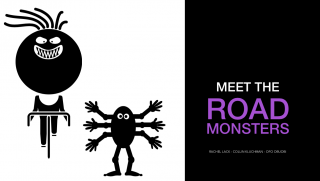 What’s Your Metro Face by Irene Reece, Jono Brandel, Tara Kasenda, and Tahira Karim
A public project that explores gender and personal security in public transportation. The mirrored glasses question riders of transport about their experience in the metro by asking the question, “What is Your Metro Face.” This question reflects back on the riders through the mirrors. This project, conceived by artists Irene, Jono, Tahira, and Tara, hopes to raise awareness, though, and discussion around metro experiences. Take a picture of your “Metro Face” and post to #WYMF @whatsyourmetroface