This project focuses on achieving core competency in a wide variety of new media technologies. Students are expected to put into practice the theories and methodologies learnt in class, but the focus is on developing technical skills and a thorough understanding the working processes of each specialization. Technology is defined in the widest sense possible – not just screen-based, digital technology, but also mechanical, chemical, auditory, experiential technologies – since the hybridization of “low tech” and “high tech” often produce powerful emotional experiences – familiar yet awe-inspiring at the same time.

There is one major area of research for this project “Low Tech in communications” and students will develop a collaborative final project taking in consideration the following aspects of their research: form, function, tool, meaning, and audience. In this course, students will study alternative uses to existing communications tools and platforms, and user information and communication technologies.

The evolution of low tech (i.e. from the industrial video in the late 1960s and early 1970s to the current user technology) has been influenced by the visual arts, and still today, artists continue to play a very important role in the development of hardware, software and applications. There is a new generation of passionate artists who use Low Tech as part of their vocabulary – they recycle the ways in which artists worked with media in the late 1960s and early 1980s. The differences and similarities in which these young artists deal with communications serve as inspiration and a great opportunity to explore the possibilities in which Low Tech, as an art movement, can be presented and debated.

How does language define us? What is the challenge coming across a different culture with different codes and language? How do we communicate to each other and transmit a message and possible effects correctly? This axe focuses on how language facilitates social interaction and human experience.

The objective of this workshop will be to question all kind of communications that produce a language, a code, a vocabulary to deliver a message. Participants will imagine a recording object that symbolizes possibilities of communication with sound/speech/noise as meaning of transmission.

The outcome will be a collective repository where participants will include all kind of creative ideas and tools to image a group exhibition. The rationale behind is to create a new conceptual object able to communicate with sound/speech/noise.

The result can take the form of a sculpture, a drawing, a performance, any kind of representation that questions the use of low technology. To achieve this we will use an audio tape recorder (a.k.a. tape deck or tape machine), an analog audio storage device that records and plays back sounds, including articulated voices, using only a cassette for storage. This will allow us to listen to the recorded information many times over in order to understand the message and to interpret the subjective understanding of each project.

Audio recordings will include transmedia processes, participants will use and mix different sources of sound – that can come from the real environment or from the digital/virtual one. The final result will be displayed in a cassette taking into consideration the group’s conceptual and logical order of their collected artworks. 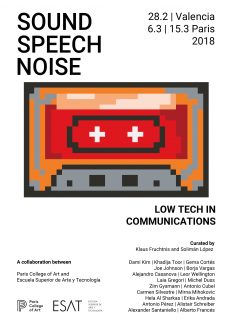