Visiting student Tina Stefanou from Sydney College of the Arts went for an open casting call for a performance piece ‘Parthenon Marbles’ by artist Alexandra Pirici, and was selected to participate! The public rehearsal ran on March 4 and 5, 2017.

Here’s what Tina had to say about her experience:

Working on the public rehearsal for Alexandra Pirici’s piece ‘Parthenon Marbles’ was a challenging and cathartic experience. The four other performers and I had three days to learn a lot of text and poses that were neither theatrical nor ‘performance art’.

The public rehearsals ran for 4 hours per day and I had to embrace the fact that I was not going to remember everything from the text. I witnessed the slow embodiment of the process and the crystallization of a work in progress. 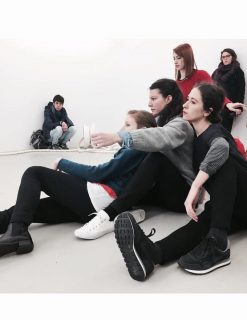 The final work ‘Parthenon Marbles’ will be premiered in Athens, Greece in April this year and speaks of institutions and collections that house cultural and art objects taken from other cultures and how these institutions can share in the circulation of value from the objects to redistribute real economic benefits to the source.

Tina Stefanou is in the Studio Arts program at Paris College of Art for the Spring 2017 semester.