It can be stressful and confusing to understand a whole new public transportation system when you’re going to a foreign country. Here is a guide to taking the RER (Réseau Express Régional) from the airport to central Paris, and a link to an interactive map to figure out which metro, tram, bus, and RER lines to use while in Paris.

Top Tip: Always hold on to your metro ticket until you finish your full trip as you may need it to exit the train station and you can be stopped by a “controller” and asked to present your ticket at any time during your trip.

An RER ticket from Charles de Gaulle costs 10€. The trip from the airport takes between 20-40 minutes from central Paris (depending on whether you get the fast or slow train.) This is what the platforms look like:

If you can’t find the platform, look for those signs:

Platforms 11 and 12 are the ones that go to Paris. Once there, look for RER B direction ROBINSON or SAINT REMY-LES-CHEVREUSES. Choose either as they both go to Zone 1 (Paris is Zone 1). This being a line popular with tourists, watch out for your pockets, valuables and luggage, it would be a shame to lose things before you even get to where you live.

From ORLY to Central Paris

Take the OrlyVal: a tram that goes from the airport to the nearest train station (Antony) where you can catch the RER. You can purchase the ticket (10€50) that works on both OrlyVal and RER B at the entrance to the OrlyVal. 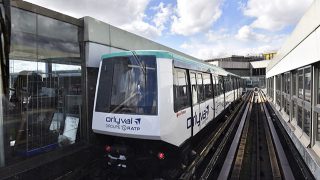 It should take less than 10 minutes to get to Antony. Once you’re there, get off the OrlyVal and you should be on the RER B platform that goes to Paris. Look for trains in the direction of MITRY-CLAYE and AEROPORT CHARLES DE GAULLE.

Sometimes only the last stop is displayed on the platform, you do need to make sure you’re going in the right direction: 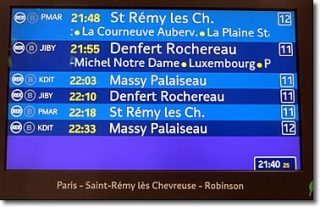 These screens indicate the departure time, direction and track number. The four letter code on the left is an indicator of the number of stops and routes. It’s a really complicated system only people who take the RER daily understand. We recommend you pick a train whose code starts with JA or KA, as they make fewer stops on their way to central Paris. However, it’s not necessary and if several trains are not scheduled for departure within a few minutes of each other, don’t worry about it.

The RER B is one of the busiest lines in Paris, and more than 4 million people use it just from Charles de Gaulle every year. Do not be worried if the train stops at some point and if there’s a delay, these things happen sometimes.

You can switch and use the metro at these stops:

Gare du Nord – Metro lines 2, 4, 5. Near PCA campus, it’s listed as PARIS NORD on signs in the RER.
Châtelet-Les-Halles – Metro lines 1, 4, 7, 11, 14. It’s the largest metro station in Europe, it can be confusing the first time.
Saint-Michel Notre Dame – Metro lines 4, 10. Right next to Notre Dame and a rather central area.
Denfert-Rochereau – Metro lines 4, 6. In the southern part of Paris.

This Interactive map of public transportation in central and greater Paris will help you map out your journey and figure out the easiest way to get to your hotel/housing.

Cab fixed fares from and to the airport

Since March 2016, there’s a fixed fare on cab rides to and from the airport. Booking a cab in advance can not cost more than 7€ and cabs cannot make you pay more than these rates:

This only works for Charles de Gaulle and Orly, no other airports!

Money changers have different rates depending on where they located in the city. If you’re in a touristy area, chances are you will get ripped off. CEN Change is near Gare de l’Est, about 10 minutes away from campus. They have really attractive rates and you can sometimes barter.

We’ve covered Velibs in a previous Paris Pas Cher article, but the best option is to get a yearly student metro card. It costs 350€ for an entire academic year for unlimited travel for zones 1 to 5. You can pick up an application form at the PCA Front Desk during orientation week. Do note: the yearly student metro card can only be applied for once you’re in Paris, and you have a French bank account. It can take from 3-6 weeks to receive the card, so for the first month, you should get a CARTE DECOUVERTE. You can apply for this at any booth in a metro station by providing an ID photo and 5€ and receive it immediately. You can top up the card either monthly (73€) or weekly. If you plan to commute every day and on the weekends to discover the city, it is the cheapest and most practical option while waiting for your student travel card.

These two train stations are closest to PCA campus.

There you have it! Don’t hesitate to ask the RATP staff for directions.

Life in Paris, Paris-Pas-Cher, and Students.